When this work was originally formulated, we drew on many robust principles. This search took us to Quantum Physics and its gentle evolution into the science of possibilities. We drew on four key characteristics of Quantum Physics as a springboard into a greater consciousness and they appear below as a foundationary essence of our work.

​“If the particles that we’re made of can be in instantaneous communication with one another, exist in two places at once, live in the past as well as the future, and even change history through choices in the present, then we can, too. The only difference between those isolated particles and us is that we’re made of a lot of them held together by the power of consciousness itself” – Gregg Braden
​ 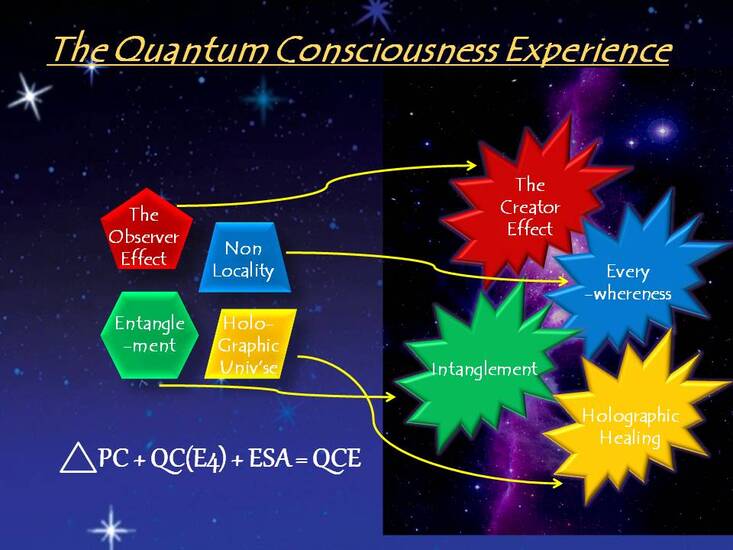 The essence of our Facilitation of Consciousness has four key aspects:

“The Creator Effect” embraces the concept that we can create anything we desire through our intention. This concept has origination in the Quantum principle of “The Observer Effect”. This experimentally proved theory states that we affect an outcome just by observing an event, it encapsulates the power of intention and confirms we are the masters of our own destiny.

“Intanglement” embraces the concept of oneness, that we are all part of the energy of the universe and that some particles are more entangled than others. When we inwardly explore the Quantum principle of “Entanglement”, we can connect with other versions of ourselves. We live in a timeless space of all ages, all alternate realities, parallel lives and our pure soul state. All are within our reach.

“Everywhereness” works on the Quantum principle of “Non locality”, that sub atomic particles can be in more than one place at one time, in fact they are everywhere at once in their awareness. They exist as probabilities until observed. We exist in all dimensions at the same time, beyond though including all linear time zones.  We can visit these places to find the healing and wisdom that serves the greater being that we are.

“Holographic Healing” works on the Quantum principle that we live in a “holographic universe”. A universe in which the large and the small are the same and that the smallest piece contains all. This simply means that any wisdom we uncover from our other selves, any healing we undertake can then send an expanding wave of higher consciousness rippling out into the fabric of the cosmos to serve the universe itself.